The Birth of Perinatal Medicine

Since 1960, a significant increase of basic and clinic investigation on normal and pathological pregnancy occurred in the developed world. The acquisition of new knowledge about the physiopathology of the pregnant women, fetus and newborn, and development of new technologies brought about the birth of a new medical subspecialty: Perinatal Medicine. Several Centers and hospital Departments specially dedicated to his new scientific field appeared and developed in several places of the world (Berlin, London, Montevideo, New York, etc.).

During these years, two prestigious medical personalities on this field have defined the limits of the subspecialty and published the first protocols: Prof. Erich Saling (Berlin), responsible for the introduction of the biochemical (acid-base balance) control of labor and Prof. Roberto Caldeyro-Barcia (Montevideo), who introduced the biophysical (electronic) control during labor.

Since 1978 the European Association of Perinatal Medicine (EAMP) is granting a prize, created and named by Prof. Saling as the «Maternité Prize». It is awarded every two years at the time when its congress takes place. The prize is awarded to those involved in Perinatology who have best contributed to its development. Therefore the list of winners is also a payroll of people that have helped to created and an large the Perinatal Medicine. They are: Geoffrey Dawes, Oxford (1976); Graeme Collingwood Liggins, Auckland (1978); Gösta Rooth, Uppsala (1980); Erich Saling, Berlin (1982); Albert Huch and Renate Huch, Zurich (1984); Ian Donald, Glasgow (1986); Heinz R. Prechtl, Groningen (1988); Alexandre Minkowski, Paris (1990); Tom Eskens, Nijmegen (1992); Edward Osmund Reynolds, London (1944); Stuart Campbell, London (1996); Claudine Amiel-Tison, Paris (1998); Asim Kurjak, Zagreb (2000); Bengt Robertson, Stockholm (2002) and Emile Papernik, Paris (2004).

The idea to have a body for Perinatal Medicine a World Wide international level came to the minds of our pioneers. In Europe Prof. E. Saling had the initiative to set up the International Congress of Perinatology which was unfortunately discontinued, and Prof. R. Cal deyro-Barcia, as FIGO president (1976-79) made several attempts to create, under FIGO auspices, an operative division specifi cally dedicated to Perinatal Medicine.

During the XI European Congress which took place in Rome (Italy) in 1988, Prof. Ermelando Cosmi proposed the foundation of the World Federation of Perinatal Medicine (WFPM), and in the FIGO board meeting several renowned scientists agreed with this idea and subscribed a document to support this initiative.

The mission of the International Academy of Perinatal Medicine is guided by the international ethical concept of fiduciary responsibility to protect and promote the health of pregnant women, fetal patients, and newborns globally. In adopting this ethical concept as its foundation, the Academy seeks to transcend differences of national origin, history, religion, ethnicity, gender and race.

In furtherance of this mission, the Academy is committed to provide evidence-based and ethically justified advice on scientific, clinical, research, and health policy matters related to perinatal medicine. A nonprofit organization was specifically created for this purpose (as well as an honorific membership organization): the International Academy of Perinatal Medicine, chartered in May 2005, in a meeting at the Headquarters of the Royal Academy of Medicine of Catalonia in Barcelona, Spain.

The Academy provides its advice independently of the framework of other professional organizations and of governments, to ensure scientifically and ethically justified information concerning health and policy to physicians, leaders of healthcare organizations, government officials, and the broader public globally concerning all aspects of perinatal medicine (F. A. Chervenak and L. McCullough).

OBJECTIVES OF THE IAPM

According to the art. 3 of the Constitution of the IAPM, the objectives of the Academy are as follows:

As it is stated in art. 1 of the Constitution of the IAPM (International Perinatal Academy of Medicine) it is a scientifi c, international and independent nonprofit academic institution for the study, evaluation, dialogue and promotion of Perinatal Medicine across the world.

The IAPM has among its identity credits:

The organization of the IAPM is based essentially on the provisions of the Constitution and the IAPM, by-laws, together with the rules and regulations approved by the International Council at request of the Board of Directors. As the diagram shows, the IAPM has one organizational structure which allows it to develop a quadruple mission: legislative, representative, executive and scientific missions. 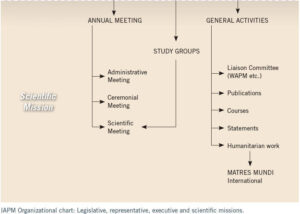 The International Council (IC), which includes the Academy’s 30 permanent or regular Fellows, is the institution’s highest governing body. In accordance with article 11 of our Constitution, the IC “sets the overall criteria to be used by the Board of Directors to achieve the IAPM’s objectives; approves, audits or amends the accounts; supervises and monitors; releases statements, etc”. Additionally, “the IC alone has the capacity to appoint new regular, associate or honorary Fellows, as specified” (article 13).

The Board of Directors (BD) is the permanent body responsible for governing, managing and representing the IAPM. It must act in accordance with the Constitution (articles 14-16). The BD comprises seven Fellows, with specific roles at the Academy: President, 4 Vice-Presidents, General Secretary and Treasurer. The members of the BD are elected by the IC for a period of five years, with the possibility of re-election.

The President runs the IAPM, acts as the Academy’s legal representative and chairs meetings of the IC and BD. However, any decision taken by the President during his/her tenure must subsequently be submitted to the governing bodies for review and approval. The Vice-Presidents shall distribute their duties amongst themselves in accordance with current needs and its the President’s agreement.

The Treasurer shall be responsible for all the Academy’s financial affairs.

The IC shall hold an ordinary plenary meeting at least once a year. Additionally, an extraordinary meeting can be convened at the instigation of the BD, or on the request of three or more regular Fellows. The agenda of the IC’s plenary meeting must include the following items: reading of the previous meeting’s minutes and the President’s, General Secretary’s, and Treasurer’s reports. The IC shall adopt resolutions by simple majority vote, the President having a casting vote in the event of a tie. Regular Fellows must be elected by unanimous vote of IC members; associate and honorary Fellows can be elected by consensus among all current members. Certain matters, such as amending these Statutes, moving the IAPM’s head office, totally or partially revoking appointments to the Board and dissolving the Academy, can only be taken at an extraordinary meeting of the IC, where motions shall be adopted by a simple majority vote.

The Board of Directors shall convene two meetings a year and a meeting shall be considered valid if at least four members thereof are present, including the President. Motions are adopted by the Board on simple majority vote of the members present.

In practice, the annual meeting of the IAPM comprises three very different meetings: the administrative meeting, which is no more than the plenary meeting of the IC described above; the ceremonial meeting, which is normally held at an appropriate location (the chapter house, amphitheatre or great hall of an academic institution) and where new fellows (both regular and associate) are sworn in, medals and diplomas are awarded and funeral orations are pronounced to honor of deceased academics; and finally, the scientific meeting, which has a schedule of lectures and round tables generally devoted to a single subject.

In everyday practice, the International Council’s function is legislative and representative, the Board of Director’s is executive and the scientific function is shared between the regular fellows who make up the study groups and those who organise the annual scientific meetings in accordance with the BD’s directives, along with the institutions that work together with the Academy to organise courses and symposiums (see chart pag. 127).

As indicated in section (d), article 3 of the constitution of the IAPM, one of its objectives is “to promote the formation of working groups focusing on perinatal medicine”. In order to fulfill this aim and as proposed by the Board of Directors, the International Council has established 7 study groups, whose main purpose is to study their chosen subjects in depth, in order to make recommendations concerning clinical matters, or aspects for investigation and to draw up statements for the health authorities, scientific societies, etc., if that is thought to be desirable. These study groups must activate interacademian activities of the IAPM.